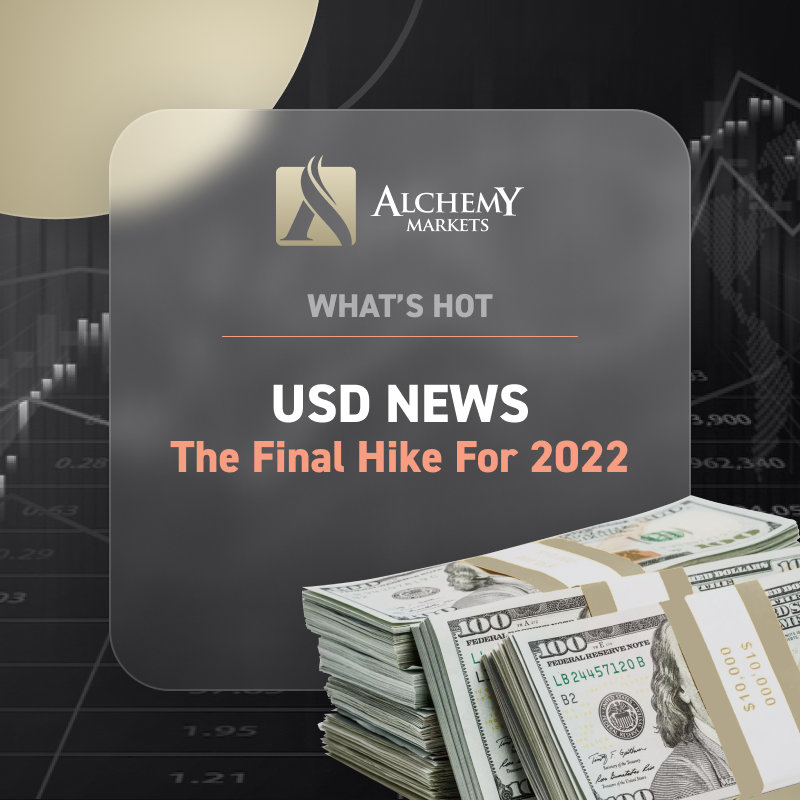 It is a highly exciting week for traders as many major central banks are announcing their interest rate decisions, and these announcements will play a pivotal role in setting the underlying tone for the global economy in 2023.  In this quick take, we will be focusing on the US dollar, the FOMC meeting, and US CPI.

As 2022 draws to an end, inflation in the U.S. is still way out of Fed’s target range and continues to be the #1 enemy of policymakers. Traders are waiting eagerly for the FOMC meeting on Wednesday as the Fed will be announcing its final rate hike for the year, and also a press conference led by Powell shortly after.

A majority of market participants are anticipating the Fed to lift rates by just 50bps after 4 consecutive aggressive hikes of 75bps.

In a speech last month, Powell himself suggested that a slowdown in interest rates may be on the horizon, citing the lagging effects of monetary policy. This further strengthens the traders’ belief in a Fed “ pivot” narrative.

To see how determined their beliefs are, we turn to the Fed Rate Watch Tool.

The probability of a 50bps rate hike is almost three times higher than a 75bps hike, and a slight increase in the probability over the past week shows how strongly the market is expecting a more dovish Fed.

Since a 50bps is considered lock-in by most, traders will therefore be awaiting comments and forward guidance from the Fed for the direction and pace of their rate hikes going into 2023. With that being said, Powell’s statements on Wednesday may continue to lean towards the hawkish side as most other Fed members do. He has previously stressed that the focus should not be on the pace of the rate hike, but instead on the terminal rate or how high the rates should go to bring inflation back to target.

Curbing inflation is easier said than done. There are a number of roadblocks for the Fed in its mission to bring down inflation such as:

The NFP and average hourly earnings reports in recent months have shown that the job market is on a rising trend. This means there exists a risk for a wage-price spiral which could hinder the Fed’s efforts.

In economics, the time between an economic action and its consequences is frequently delayed. It takes time for their effects to materialize. We call this a time lag.

The Fed began raising its interest rates in March this year, and it is been implemented at a rather aggressive pace. U.S. interest rates rose from 0.25% to 4% in just over 7 months and worries on overtightening and the delayed impact that this series of rate hikes will have on the economy started to surface.

The federal funds rate is expected to peak at a target range of 5%-5.25% in the middle of 2023 according to Bank of America’s baseline forecast, although Gapen, the bank’s chief economist, recently suggested that given the labor market’s ongoing momentum, it may rise as high as 6%. Currently, the Fed funds rate is in the range of 3.75% and 4%.

Nonetheless, a wild card remains on the table- The CPI.

Inflation and The Fed

The US CPI will precede the Fed’s meeting with its data scheduled to be released later during the New York session. It will be a key driver to initiate this week’s volatility. Let’s have a look at the stats.

The Event Chart above depicts a steady decrease in the inflation rate on a y/y basis after it peaked in June, offering slight relief to the markets. CPI m/m and y/y are expected to slow down in the previous month by 0.1% and 0.4% respectively which may stoke optimism among investors in regard to a Fed Pivot.

Although the tone and language of the Fed have significant weightage, muted inflation data in line with expectations may overshadow Fed’s statement. On the flip side, an upside surprise in the inflation print will pose a bigger risk for a more violent market reaction following a continuous weakening in the US dollar over the past month.

The Fed has made clear its plan to hike by a smaller 50bps in the upcoming meeting. Thus, the key drivers for USD and related assets are:

What are the markets doing?

Dollar Yen eased off its three-decade high in October and November thanks to Japanese intervention and the dollar’s weakness. A strong mean reversal accompanied by continued dollar weakness has allowed Yen to break below its ascending trendline despite an evident interest rate differential between the Yen and the dollar.

This month’s NFP, coinciding with both the 134.50 key support and 200-day SMA has allowed the pair to bounce up and recovered some of the losses. Currently trading in a well-defined range between 138.70 and 134.50, we believe a breakout is imminent as volatility will increase and remain elevated throughout the rest of the week.

Having said that, the markets could go either way. If traders continue to perceive the Fed as being more dovish than they sound, USDJPY could continue to tank and subsequently test the key support again. On the contrary, a dollar short squeeze could also happen depending on whether investors will flock to safe haven to end the year.