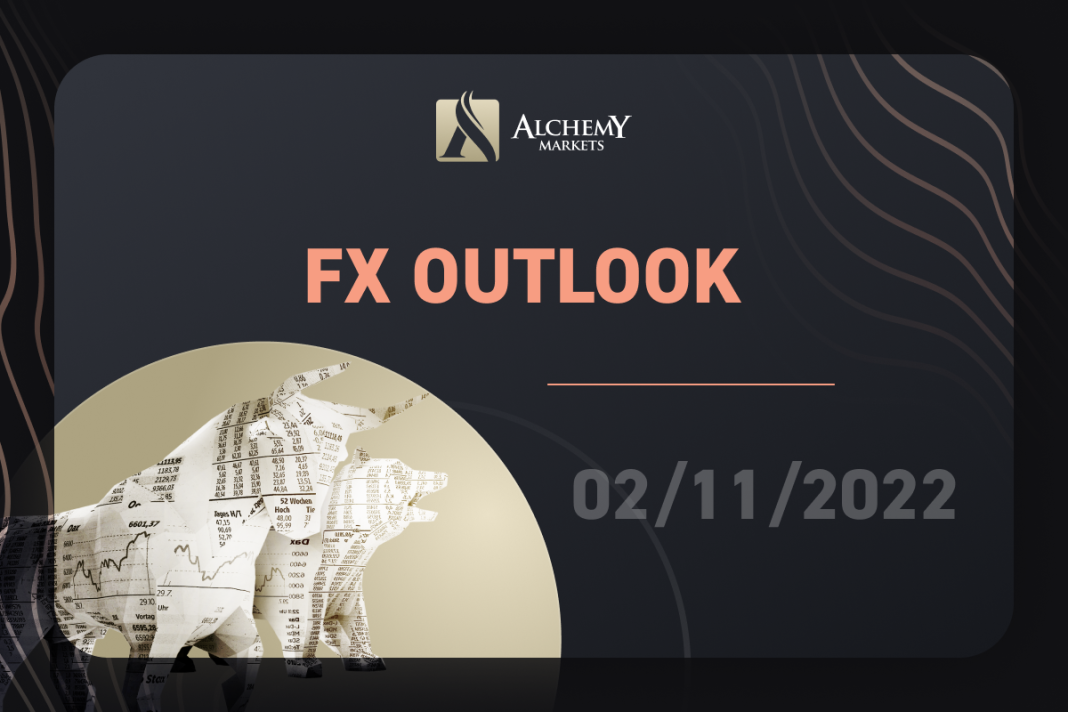 First thing first, a kind reminder that DST has changed for the Eurozone and London since Sunday, 30th of October. New York’s DST is slated to end on the 6th of November, so please be aware that trading sessions may vary for traders in different regions.

The market had a light start to the week with only the RBA raising its cash rates by 25bps as expected on Tuesday. The RBA seems to get more dovish as they stuck with a more conservative rate hike starting last month. Other than that, we anticipate a build-up of volatility starting from this moment as some of the most important reports and central bank decisions are coming out shortly.

This Outlook will cover the main highlights for this week, including the FOMC statement and press conference that will commence in two hours at 2 pm EST, 2 November, and the BOE official bank rates that are expected on Thursday. Oh, and how could we forget about the NFP report on Friday?
___________________

By this point in time, the majority of the market is convinced that the Fed will raise rates by 75bps, which means the hike has largely been priced in. Therefore, this November meeting is not really about November. Rather, it is about what is going to happen next based on the clues and hints that Fed Chair Powell may drop in the press briefing.

Focus on Powell’s language as it is going to be critical for the US Dollar’s outlook. There could be signals that rate hikes will be slowing down in December with the terminal rate expected to be in the range of 4.75% to 5% in March next year, marking an end to the current cycle of rate hikes.

If there really is an intention to slow down the rate hikes, the difficulty for Powell, therefore, becomes to find a subtle way to suggest a potential reduction in the next rate hikes without seriously disappointing the market given how aggressively the Fed has been attacking inflation in recent months.

With that being said, there are still some wild cards on the table, one of which is inflation figures. If inflation still remains surprisingly high when the next CPI is released (it is just 8 days away), it could shift market sentiment and the Fed’s next move.
___________________

The Fiber has been trading back below parity for the fourth trading day now, still sandwiched between numerous technical indicators including both the 50 and 200 period SMA, and in between the broken trendline and the 0.9900 significant level.

EURUSD shall get more directional bias and the indecision should end as FOMC and other major news hit the wires.

If the US Dollar strengthens, the 0.9810 level shall be tested shortly and if it fails to hold, the 0.9700 previous swing low area will be the next target. Inversely, a weaker dollar may lead to a rebound for EURUSD to test parity. A break above parity will open the way to further upside with the immediate target at 1.0115.
___________________

According to our advanced Economic Calendar, the consensus for the interest rate decision is a 75bps rate hike from the BOE, its biggest hike in the past 33 years. However, the matter gets complicated when we consider the recent political drama in the UK.

The current government is working hard to repair the market’s confidence that has been shattered by the former PM’s mini-budget while the nation’s inflation is soaring past double digits, printing 10.1% in its previous reading.

On the flip side, recessionary fears are looming over the UK’s economy, leading to an increased possibility of a softer hike of just half a percent. If the BOE disappoints and misses the forecast, what would happen to Sterling?

The Cable is consolidating into a triangle pattern as we get closer to the FOMC Meeting, which usually leads to an explosive breakout.  The 1.1450 level is acting as a support, which itself is ‘supported’ by the 50-period moving average.

With both the US and UK’s central banks expected to deliver a softer-than-expected stance, the greenback may have the upper hand in this tug-of-war because of how the UK is still in recovery mode.