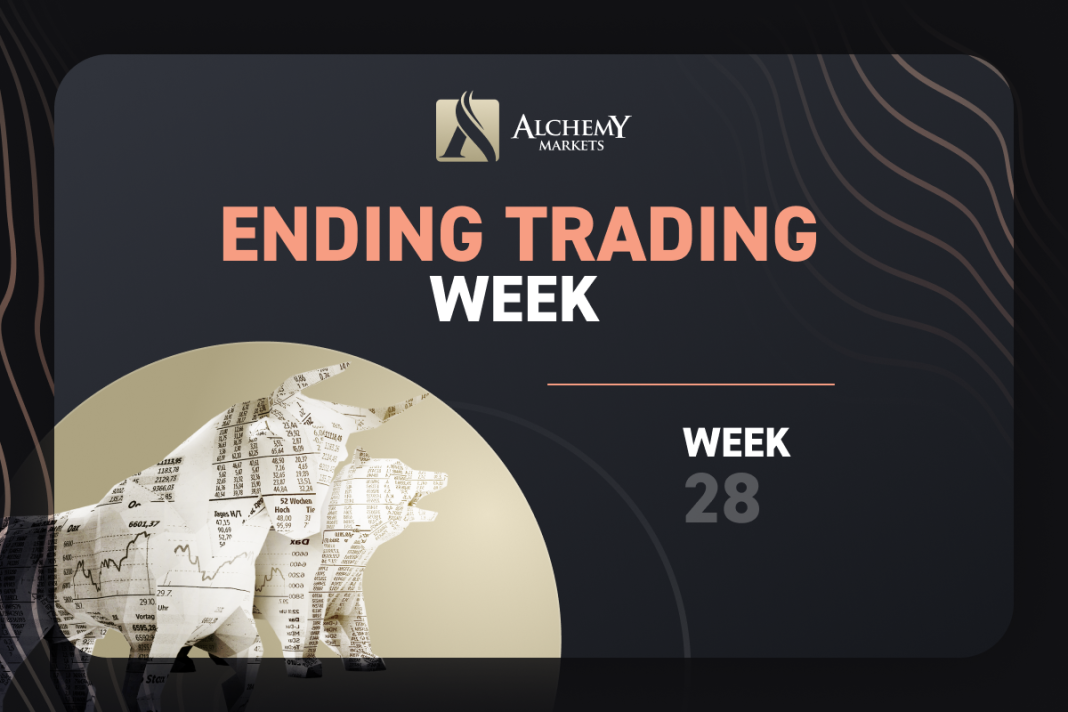 Here are some of the key highlights for this week

Surprise? To be honest, not so much. Elon Musk just a few days ago decided to pull out and terminate his deal to buy Twitter which led to him being sued by the company in question. You might be curious why he decided to walk away from the deal. Musk claimed in a filing to the SEC that the social media company failed to meet its contractual obligations and did not provide information requested by Musk earlier in regards to fake and spam accounts.

Obviously they are suing Musk in the court. Twitter board Chair Bret Taylor also tweeted that they are still committed to ensure that the transaction goes through based on the terms and price agreed upon and legal actions will be pursued in order to enforce the deal.

The deadline of the deal falls on 24th of October and the parties will have another half a year to close it should the transaction still pending approval from regulatory bodies at that time. 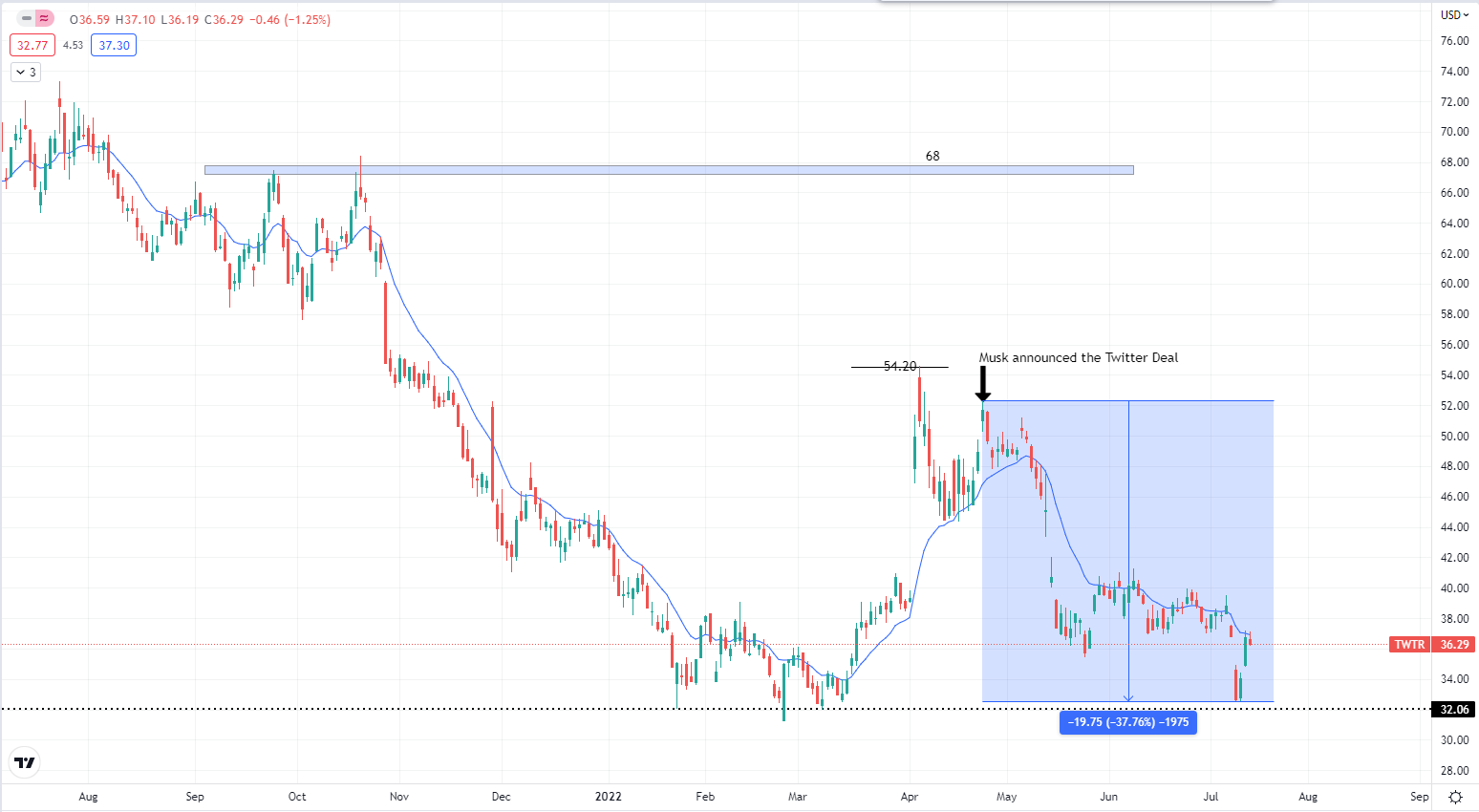 The shares have seen a loss of almost 40% of its value since the deal was first made public. Although Musk said the purchase of Twitter was not for financial gains, it is billions of dollars at stake. What would you do?

We have seen some recovery after the price bounced from $32 support level but is still trading below the 14 EMA.  The future outlook for Twitter will be highly dependent on the progress in the court.  But I supposed there will be no winner from this except the short sellers.

Tug of War between EUR and USD – Parity 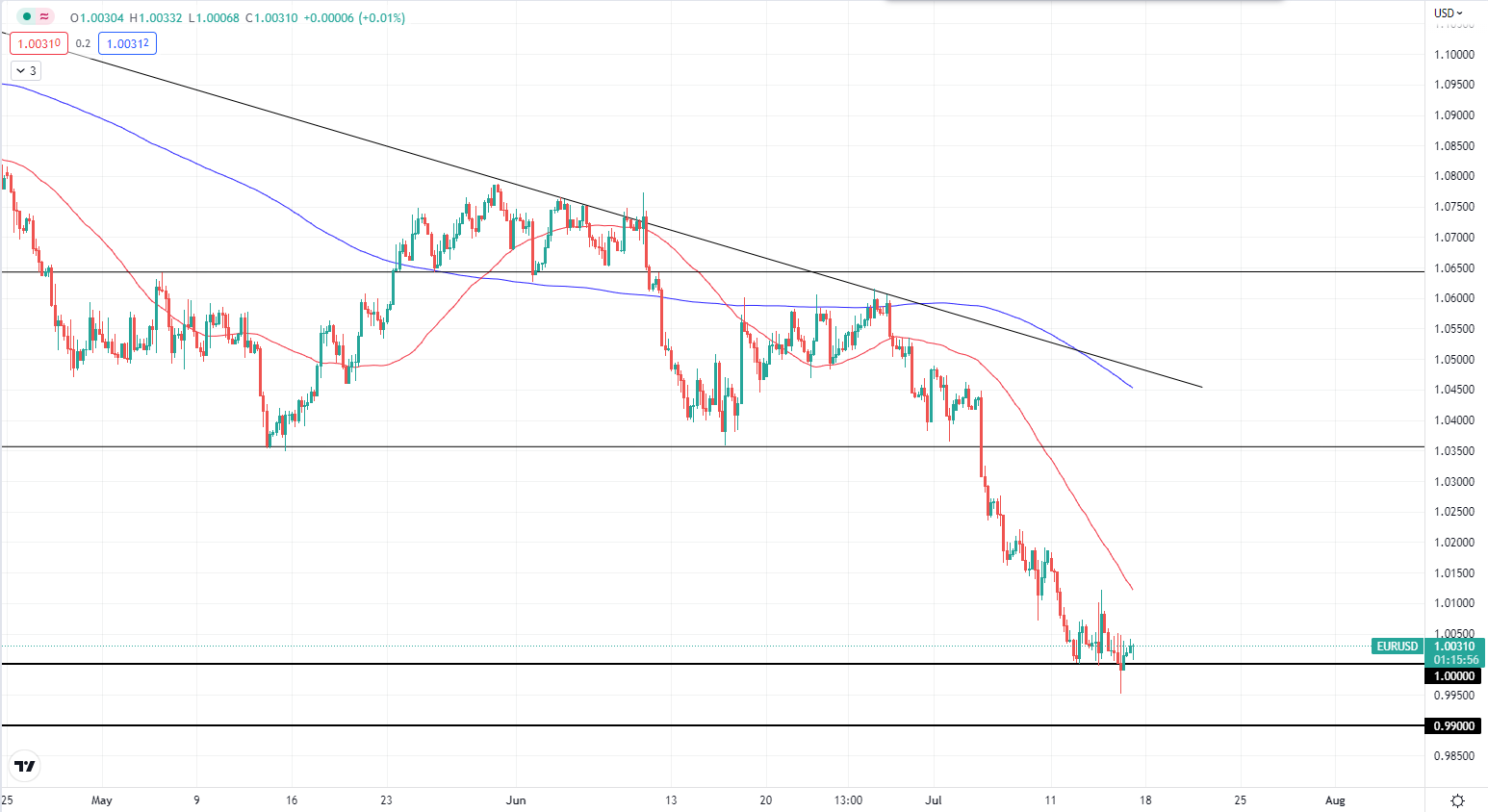 The dollar with its humongous strength pushed EURUSD down to a low of 0.9952 during yesterday’s trading session.The Euro was able to fight to ensure the pair closed above 1.0000 and the pair is still flirting with the parity level. I wouldn’t be surprised if there is a huge move to either side to end the week as this is the most widely traded pair and it is at a pivotal level that hasn’t been seen in 2 decades.

Our outlook remains tilted to the downside until the market structure and chart patterns suggest otherwise. If 1.0000 fails to hold, 0.99 will be the next psychological level to refer to.  The 50 day moving average will be the dynamic resistance capping the pair.

Energy Crisis or not? 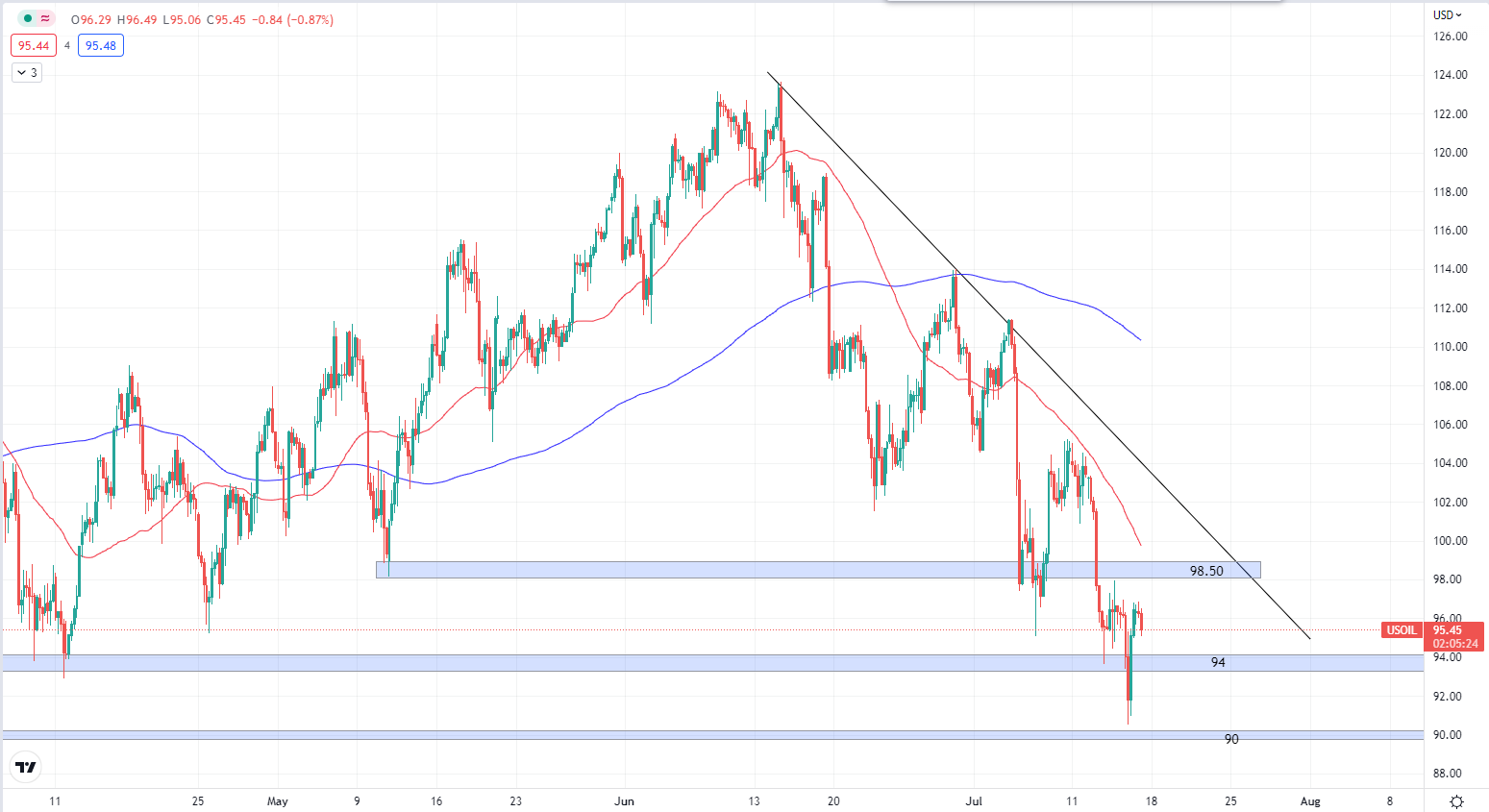 If we are just analyzing from a technical point of view, the prices were forming lower highs and lower lows. These are textbook formations with a high chance of price following through. In terms of momentum, it is apparent that the bears are way stronger just by looking at the relative size of the candles and speed of the price swings.

Yesterday, WTI oil broke below $94 key support which we have paid attention to for quite some time, although it managed to end the session above the level . The low for yesterday, $90.54 was the price for crude before the Russian-Ukraine war. What does this tell us?

It is most likely conveying that tight supply concerns are not solid enough to support oil prices. On the other hand, recessionary concerns amidst record inflation level and fast-rising global interest rate is putting a gigantic amount of pressure on oil.

If $94 breaks, $90 will be the next psychological support to watch out for. We remain bearish on our outlook until price manages to invalidate the bearish trendline.

We can also draw confluence from the Interest Rate decision by the Bank of Canada on Wednesday.

They surprised the market by rocking a full point hike in interest rate. This means they are very far behind and are trying to do more now to keep inflation in check (hopefully).

But what is interesting was what happened to USDCAD. 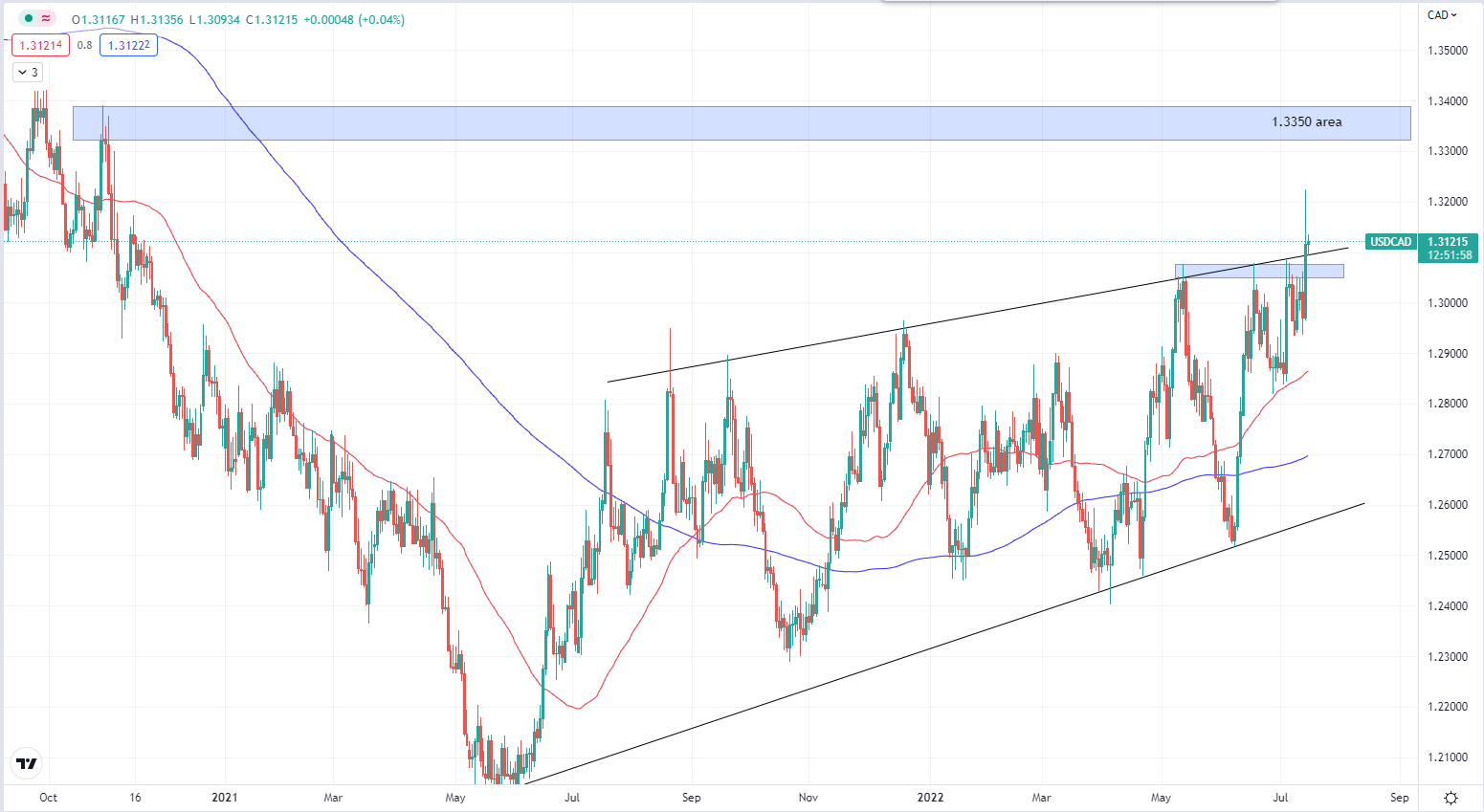 On Wednesday, the rate hike was announced. But USDCAD stayed still, for a few hours. The market only started to pick up steam and rocketed 250 pips after more than 12 hours from the event.

The Bank of Canada made a surprise move to raise their rates by 100 bps versus the expected 75 bps, but the CAD got weaker against the dollar? IS USD really that strong?

Not to forget that CAD is also a commodity currency. CAD is related to oil price as Canada is one of the largest oil producers and exporters in the world. If CAD is depreciating, what does that mean for the outlook on oil?

Looking at the chart, USDCAD broke out of the channel and also the resistance zone marked in blue and therefore a higher chance of it climbing to the next key area at 1.3350.